The answer may lie with quantum materials that are able to achieve neuromorphic, or brain-like, computing capabilities with low energy consumption. Since 2018, Quantum Materials for Energy Efficient Neuromorphic Computing (Q-MEEN-C) — led by the University of California San Diego — has been at the forefront of this research. Now, through a highly competitive process, the Department of Energy (DOE) has announced $12.6 million in renewed funding for the center.

“This additional round of funding is a testament to the Department of Energy’s faith in the work Q-MEEN-C is doing,” stated UC San Diego Chancellor Pradeep K. Khosla. “The center embodies many of our guiding principles of collaboration and leading-edge research. This achievement not only reflects positively on the researchers, but also the Department of Physics and the entire university."

Q-MEEN-C is a DOE Energy Frontier Research Center (EFRC) — one of more than 40 created to help tackle the world’s most pressing energy technology challenges. The center, led by UC San Diego, is a collaborative effort that brings together researchers from around the globe. They each bring unique expertise to a compelling scientific challenge: creating a brain-like computer with drastically lower energy requirements.

“With current technology, to make a device that mimics the brain, the local energy requirement is so large that it’s not practical,” stated Q-MEEN-C Director and Distinguished Professor of Physics Ivan K. Schuller. “During the semiconductor revolution, materials science helped developers identify silicon and germanium as ideal materials. It is the same now, where we see quantum materials as the key to increasing computational power while also decreasing local energy consumption.”

Quantum materials are a class of new materials that display more complex quantum mechanical behavior than silicon, and whose range of properties are exquisitely suited for more efficient and transformative neuromorphic computing.

A summary of the key scientific accomplishments of Q-MEEN-C since it was established in 2018. (all illustrations cr: Mario Rojas / UC San Diego)

When Q-MEEN-C was established, researchers set out to determine whether quantum materials were even viable as an energy-efficient material for neuromorphic computing. Over the past four years, they have successfully demonstrated that quantum materials have great potential due to their unusual electronic and magnetic properties.

“This is only the beginning,” stated center co-director and Professor of Physics Alex Frañó. “Now that we’ve found viable materials, we’re laying the foundation for future research. The human brain is a network of neurons, synapses and dendrites — you can’t have a brain-like computer without a brain-like network. We can take these quantum materials and combine them with other materials to see how they react with each other as a step toward creating neuromorphic computing networks.”

Frañó says the center is taking a holistic approach to the problem — from a single electron in an atom all the way to the complexity of a computer chip: “You have to understand the physics at every stage.” This is known as “emergence”— where the whole is more than the sum of its parts, even if it’s not explicitly known how all the parts work together. 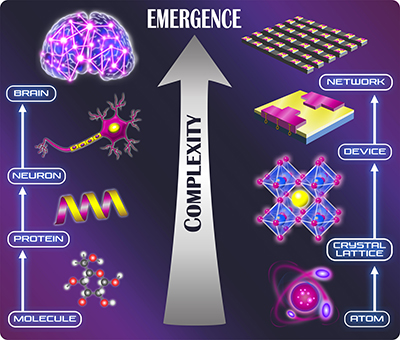 Q-MEEN-C research seeks to mimic the emergent complexity that makes the brain an efficient computer.

A primary target in developing neuromorphic computing is pattern recognition, classification and learning — things the brain does remarkably well with minimal energy input. A human could see an image of the Golden Gate Bridge and an image of the Statue of Liberty and instantly differentiate between the two landmarks. A computer would have to individually analyze the billions of pixels in multiple images to come to the same conclusion. Add in fog or rain or a different angle and it becomes even more complicated.

While we see this ability to some extent when photo software recognizes similar faces in a feed as being the same person, there is a limit depending on how detailed the images are, how long it takes to categorize them and the amount of energy it requires from your phone battery.

“It’s not just a software problem,” Schuller stated. “You won’t achieve energy efficiency with software improvements. There has to be a new kind of hardware too.”

A summary of Q-MEEN-C's key metrics since 2018, including members and publications.

One of the stated goals of the EFRCs is to train future energy scientists, and the DOE funding supports students and postdoctoral scholars at Q-MEEN-C. “We’re not just creating the next generation of knowledge, but also the next generation of researchers,” stated Frañó. “One day our students will lead their own research groups on neuromorphic computing.”

“We are motivated by a continual sense of wonder. Maybe neuromorphic computing won’t unfold the way we envision it today, but it will unfold somehow. It may be decades from now and it likely surpasses what we’re able to currently forecast,” said Schuller. “But this next generation — they will see something marvelous.”

Funding provided by DOE #DE-SC0019273. A full list of principal investigators and participating institutions can be found on the Q-MEEN-C website.