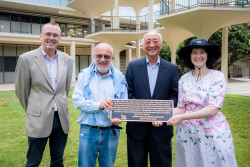 Mayer Hall recognized as the birthplace of density functional theory

Is there magic in the walls of Mayer Hall? This is the question Oleg Shpyrko, chair of the Department of Physics at the University of California San Diego, asked the audience gathered in the auditorium for a daylong series of events to celebrate the building’s designation as a historical site by the American Physical Society (APS).

Mayer Hall, after all, was named after famed theoretical physicist Maria Goeppert Mayer—the second woman ever to win the Nobel Prize in physics. It was also the birthplace of metamaterials which, among other things, have been used to create Harry Potter-like “invisibility cloaks.” In the labs of Mayer Hall, many novel high-temperature superconductors and quantum materials were developed. It was also in Mayer Hall where Walter Kohn and Lu Jeu Sham created the Kohn-Sham equation as part of their work in establishing density functional theory, or DFT.

Shpyrko concluded that, no, there wasn’t magic inside the walls of Mayer Hall, but there was magic in the people who worked there.

And there was magic in the pivotal Kohn-Sham equation. Its subsequent impact on everything from new materials design to drug discovery led APS to designate Mayer Hall a historical site, stating that DFT “is the most used technique for calculating the properties of nuclei, molecules, polymers, macromolecules, surfaces and bulk materials in the chemical, biological and physical sciences.”

What is density functional theory?

In the early part of the 20th century, the development of quantum mechanics allowed physicists to learn about the properties and behavior of atoms. Traditionally, the Schrödinger equation was used to determine the probabilistic location and behavior of a particle, including the complexity associated with quantum superposition, which is the basis of the famous “Schrödinger’s cat” paradox.

As a result, this equation requires a significant amount of computational effort for each individual electron as well as interactions with every other electron and nuclei. Even a single water molecule contains 10 electrons. Thus, determining the electron behavior of larger molecules quickly becomes prohibitive, akin to controlling the behavior of hundreds of quantum-mechanical Schrödinger’s kittens who are actively interacting with each other while occupying many locations at once.

From 1964-1966, Kohn and Sham laid the foundation of a computation method based on a single-particle approach, which became known as the Kohn-Sham equation and formed the basis of density functional theory.

DFT simplified the previous process by using the density of all the electrons in the system to determine electron behavior. Researchers no longer needed to focus on each individual electron, but used their collective density as the single variable to solve for, transforming the way quantum mechanics research was performed.

DFT is known as an ab initio, or first principle method, because it can predict material properties for unknown systems without any experimental input. So while it does not precisely solve the Schrödinger equation, it does offer a close approximation at a fraction of the computational effort.

Understanding the electronic properties of complex systems is essential to the design and engineering of new materials and drugs. DFT has been used to study and develop the properties of important materials such as novel semiconductors, new catalysts, neuromorphic materials and complex molecules.

For instance, drug discovery uses DFT as a fast and efficient method to limit the number of drugs that must be experimentally tested for their efficacy in the treatment of many diseases. Thanks to DFT, the time and cost of drug development have been considerably reduced.

The UC San Diego School of Physical Sciences and the physics department worked together to create an engaging, informative day of events to celebrate Mayer Hall’s designation. Although APS officially named Mayer Hall a historic site in 2021, the celebration was postponed until now due to the pandemic.

Distinguished Professor of Physics Ivan Schuller and Shpyrko welcomed attendees before opening the day with a series of lectures on the impacts of DFT. Researchers and experts from around the world provided insight into the ways DFT continues to shape science, engineering and medicine. The talks touched on everything from materials physics and molecular dynamics to drug discovery and supercomputing.

Dean Boggs spoke about the spirit of discovery that exists in the School of Physical Sciences.

After the lectures and a panel discussion, the university held a dedication ceremony and plaque unveiling. From APS, President Jon Bagger and former President Jim Gates commented on how meaningful the designation was and the continuing importance of DFT.

UC San Diego’s Executive Vice Chancellor Elizabeth H. Simmons noted that the groundbreaking work of Kohn, Sham and colleague Pierre Hohenberg was only one example of the extraordinary talent found in the School of Physical Sciences.

“The efforts of faculty like Kohn, Sham, Mayer, Roger Tsien, Sally Ride, Harold Urey and others are testament to our university’s remarkable history as a community of visionaries who push boundaries and break barriers to change the world,” she said. “Their transformative impacts across academic disciplines and in the lives of student and faculty colleagues will continue to reverberate into the future.”