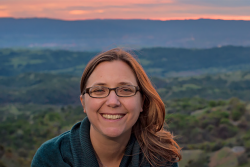 UC San Diego Associate Professor of Physics Shelley Wright will receive the 2022 Drake Award from the SETI Institute. Wright will be recognized for her decades-long work in the field of searching for extraterrestrial intelligence (SETI).

The Drake Award is named after Frank Drake, considered the founder of scientific SETI research and creator of the Drake equation, used to estimate the number of active, communicative civilizations in our galaxy. Drake is Professor Emeritus of Astronomy and Astrophysics at UC Santa Cruz, where Wright completed her undergraduate studies.

“Our current knowledge of the ubiquity of planets and the vast number of habitable worlds in our own galaxy make SETI research more compelling than ever,” said President and CEO of the SETI Institute Bill Diamond. “Shelley has expanded the field beyond radio astronomy to new and innovative search modalities. We are delighted to honor her work and dedication to the field of SETI research through this recognition.”

If the life form is the sender, then Wright’s job is to have a receiver that can accept the message—a difficult task when you don’t know how the message is being sent. To have the best receivers possible, Wright and her team have developed two instruments: NIROSETI (The Near-Infrared Optical SETI) and Panoramic SETI (PANOSETI).

NIROSETI is the first instrument of its kind designed to search for signals from extraterrestrials in near-infrared light, which lies just beyond what is visible to the human eye. The near-infrared wavelengths provide an optimal spectral region to search for signals from extraterrestrials because they offer a unique window for interstellar communication with less dimming of distant objects by interstellar dust than in the visible spectrum.

PANOSETI is an optical and near-infrared experiment designed to increase sky area searched, wavelengths covered, number of stellar systems observed, and duration of time monitored in the search for intelligent life.

Wright first became interested in SETI as an undergraduate physics major at UC Santa Cruz when she attended an astrobiology conference at NASA’s Ames Research Center in Silicon Valley. She happened to sit at a table where Drake and other SETI scientists were discussing new instrumentation. Wright said she wanted to be a part of it.

“This was at a time when SETI was taboo in scientific circles. It wasn’t seen as real science,” Wright stated. “But it was exciting hearing them talk about intelligent life in the universe and how we might be able to detect it. Drake was a wonderful mentor. I feel indebted to him and hope to inspire my own students the way he inspired me.”

Wright notes a shift in thinking among scientists from when she was a student. Today, knowledge of exoplanets—those that lie beyond our solar system—and the understanding that the Earth isn’t unique in the universe has brought more recognition to the search for intelligent life.

This cultural shift has helped build a pipeline of future SETI researchers. “To receive any award is an honor, but to receive an award named after your mentor is really special,” Wright said. “I hope to carry the torch to train the next generation of SETI scientists.”

Being a mentor to junior UC San Diego astrophysics is something Wright takes seriously. Jérôme Maire, an OIRlab project scientist, said, “This award is a great recognition of Professor Wright and the students and individuals who work on SETI at UC San Diego. Professor Wright got me involved with SETI research and stoked my interest in exploring the challenges of developing new instruments that attempt to find life in the universe."

Wright says trying to detect communications from another life form has made her think about research differently. “How do you search for something unknown with the tools you have today? How do you use present-day technology in new ways? These are fascinating question,” she stated. “We are still in our technological infancy compared to the age of the universe.”