Bridging a Gap in the Theory of Synaptic Transmission 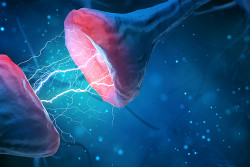 If you touch a hot pan, your hand may instantly recoil. This action happens automatically thanks to synapses, which not only help your body sense that the pan is hot, but also send a signal to your hand to pull away. Synapses are the structures through which neurons speak to each other and help govern many physiological functions—including the ability to process and store memories. Synapses from different biological systems vary greatly in size, speed of signal transmission, and molecular constituents.

Despite these variations, the lab of UC San Diego Professor of Physics Olga Dudko has discovered a theory of synaptic transmission that leads to a universal curve for vastly different synapses. Universality, a central concept in physics, indicates that phenomena in seemingly unrelated systems are in fact governed by common physical principles. The new discovery revealed that synapses with strikingly different properties still exhibit similar patterns and behaviors, and these similarities can be precisely captured through a universal scaling law. This work was published last December in eLife.

“There are numerous known examples of universality in non-living matter, but to see it in living systems—with all their complexity and bewildering number and diversity of molecular constituents—is truly remarkable,” stated Dudko.

Dudko saw the potential to create not a model—which is context-specific—but a general theory of synaptic behavior. “We needed to translate the disparate biological facts into the unifying language of physics. How can we map the diverse synaptic mechanisms onto a single mathematical framework?” she asked.

“How learning and memory arise from various synaptic activities in our brain is one of the biggest mysteries in neuroscience and artificial intelligence,” stated Wang. “Despite decades of research, we still don’t have a clear picture of how synapses work. From this view, understanding synaptic transmission is an essential step toward better understanding of the human brain.”

The top figure shows peak release rates. The bottom figure demonstrates that the data from all these synapses collapses onto a single curve. 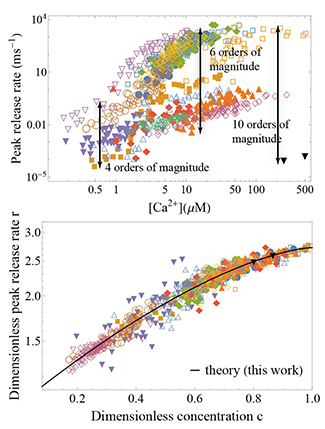 Wang and Dudko combed through reams of biological literature and saw there was a lot of high-quality data that was suitable to use in testing the theory. The data came from labs around the world and included a wide range of synaptic variations, including different sizes, rates of vesicle release and molecular calcium sensors. Despite these differences, common patterns emerged.

Even though measured rates of neurotransmitter release in these synapses varied by 10 orders of magnitude, they found that after proper rescaling, the data all “collapsed” onto the universal curve predicted by the theory. “At first glance, the data from different synaptic systems look quite unrelated to each other,” Dudko stated. “But our theory revealed unifying patterns.”

Once the theory had been developed and experimental data deciphered, the next challenge was communicating the results back to biologists. The notion of universality is unusual in biology, and the claims of universality in synaptic transmission were met with suggestions of testing additional synaptic systems. Remarkably, with every new set of data, Dudko and Wang found the universality still held true.

Dudko and Wang hope that their theory will provide a quantitative physical framework that other researchers can use to address questions about synaptic plasticity and other synaptic functions. The theory may even help inspire the design of artificial intelligence. Stated Dudko, “This theory is a tool for experimentalists to extract from their data the wealth of information that uniquely identifies each synapse and that would otherwise remain hidden in the data.”