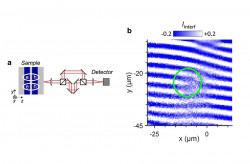 Take a window screen and put it on top of another. Slide the screens back and forth and a dizzying array of geometrical shapes and wavy patterns come into view. Known as the moiré effect, this phenomenon is now helping physicists at the University of California San Diego explain fundamental properties of exotic particles, such as excitons. In seeking explanations for the mechanism behind a visual “fork” tied to excitons (area within green circle), researchers landed on the visual phenomenon known as the moiré effect.

Excitons, pairs of negatively charged electrons and positively charged “holes,” are created by light in materials such as semiconductors, transport energy in materials and create light when the electrons and holes recombine. Scientists say excitons could one day form the backbone of futuristic computers and cell phones, although there is much that remains to be learned about these particles.

For decades, excitons have been theorized as featuring superfluidity—the ability to flow without friction—but only now has such an idea been proven through a series of investigations completed by UC San Diego researchers.

Working with their colleagues at UC Santa Barbara, they publish details of their discoveries in a paper published February 19 in the journal Nature Communications.

In 2012, a research team led by UC San Diego Professor of Physics Leonid Butov reported the discovery of spontaneous coherence, or Bose-Einstein condensation, of excitons—a new state of matter that emerged when excitons were cooled to near absolute zero temperatures. They also found that this new state of matter led to the spontaneous production of new intricate patterns known as “spin textures” and “phase singularities.”

Yet the origin of such mysterious singularities, which resemble fork patterns, remained hidden for nearly a decade.

Butov said physicists attempted to explain the fork pattern through an array of mechanisms, yet none of these approaches provided a correct answer.

Finally, the researchers eventually came to the moiré effect.

“We analyzed these interference patterns through the common ways to explain a fork such as this and none of them worked,” said Butov. “As we searched for a new mechanism we came to the moiré effect and it proved to be the answer.”

Butov says the moiré effect also could be a mechanism that helps explain interference patterns for systems other than excitons.

Beyond the fork pattern, the second significant finding described in the paper centers on superfluidity, the ability of substances to flow without friction.

The exciton superfluidity was theoretically predicted many years ago and now the UC San Diego team found the evidence for this fundamental phenomenon. For the first time, scientists have been able to show that excitons propagate for long periods of time without encountering obstacles.

“The ballistic exciton propagation over long times and over long distances is the evidence for exciton superfluidity,” said Butov.

He and his colleagues are now expanding on their findings by investigating exciton principles at higher temperatures, as well as the fundamentals of creating devices based on excitons.

Funding for the research was provided by the Department of Energy Office of Basic Energy Sciences (DE-FG02–07ER46449). Device fabrication and simulations were supported by the Semiconductor Research Corporation and the National Science Foundation.