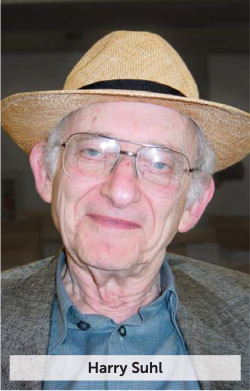 Harry Suhl, who made seminal contributions to condensed-matter physics and was among the founding faculty at the University of California, San Diego, died on 3 March 2020 after an enviably long, happy, and productive life. He was also well known and much beloved as a quick wit, a gourmet, a sharp dresser, and an all-around bon vivant.

Harry was born in Leipzig, Germany, on 18 October 1922. In 1938, during a threatening period for German Jews such as Harry and his family, his father, Bernard, wrote to a tenuous British business contact requesting that they be sponsored for immigration as refugees. In May 1939 the Suhls emigrated from Leipzig to London, where Harry finished his secondary schooling.

A year later Harry and Bernard were taken to a series of internment camps, which the British government had established for aliens with potential Axis sympathies. At Huyton, near Liverpool, a community developed among the Jewish intelligentsia, who were permitted access to books and records and who sponsored public lectures on subjects such as the new “quantum theory.” It was in that setting where Harry’s interest in physics was first kindled. Following a string of happy accidents, he found himself released from internment and studying at the University of Wales. After earning his BSc in 1943, he worked on radar for the British Navy until he began his PhD studies in ionospheric physics at Oxford University in 1946.

By late 1948 Harry had his PhD and a job at Bell Labs. It was a remarkable period at the R&D company, especially for solid-state physics. The technical staff at the Murray Hill, New Jersey, campus was brimming with current and future luminaries, such as John Bardeen, Charles Kittel, Bernd Matthias, Philip Anderson, George Feher, and Theodore Geballe. Also, far less of a distinction was made between experimentalists and theorists at that time than now.

Suhl’s earliest work at Bell Labs was on charge-carrier dynamics in semiconductors in magnetic fields. In 1953 Suhl and Larry Walker comprehensively analyzed wave propagation in waveguides that are filled with gyromagnetic and gyroelectric media, relevant to various microwave devices. In 1955–56 Suhl provided the definitive explanation of nonlinear effects in ferromagnetic resonance, now known as the Suhl instability. That work led to his getting a patent for a ferromagnetic parametric amplifier in 1956 and inspired wide use of parametric amplification in general. In 1957 Suhl and Tuto Nakamura independently uncovered a major source of broadening of NMR lines in magnetically ordered media, now known as the Suhl– Nakamura interaction.

Suhl’s interests then turned to superconductivity, where he extended the Bardeen-Cooper-Schrieffer theory to two-band systems, and to quantum many-body problems. In 1961, shortly after arriving at the just-opened University of California, La Jolla—later renamed UC San Diego—he made major contributions to the theory of many-body effects on impurity states in metals. Suhl showed how the recently discovered Kondo singularity was replaced by a Fermi surface resonance, a feature now known as the Abrikosov–Suhl resonance, in dilute magnetic alloys. Throughout the remainder of his career, Suhl continued to work on various aspects of magnetism, but he also branched out into such areas as surface physics, catalysis and reaction kinetics, nonlinear dynamics, and biological physics.

Suhl served on the editorial board for Physical Review in 1963–72 and for Solid State Communications in 1961–90; was coeditor with George Rado of the highly influential five-volume series Magnetism: A Treatise on Modern Theory and Materials (Academic Press, 1963–73); and authored the 2007 monograph Relaxation Processes in Micromagnetics (Oxford University Press). He also twice served as chair of the UC San Diego physics department, and he was director of its Institute for Pure and Applied Physical Sciences from 1980 to 1991.

Among his friends and colleagues, Harry was regarded with deep affection for his wit and conviviality. When once asked what he did to keep fit, Harry replied, “Oh, I really don’t subscribe to strenuous exercise. However, I do get up every morning and wind my watch by an open window.” At a wonderfully inspiring and generous speech at his own 70th birthday conference, Harry offered the following “unwelcome advice to the younger people”:  “Above all, don’t get wiser as you get older. If you do, you will become too inhibited to try the impossible, and one can achieve the limits of the possible only by occasionally venturing beyond them. The famous proverb should really be transposed: Angels rush in where fools fear to tread.”