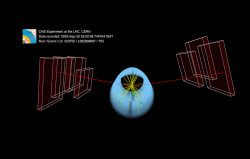 Ever since the elusive Higgs boson was discovered in 2012, scientists have sought the answer to the question about how elementary particles—which make up everything in the universe from planets to people—acquired their unique masses. UC San Diego physicists, who were part of the team that made that celestial discovery and who continue that search for an answer, have just made another breakthrough.

The university’s Professor of Physics Vivek Sharma, an expert who studies the structure of very small things and who is a member of the Compact Muon Solenoid (CMS) Collaboration at the Large Hadron Collider (LHC) at CERN, guided the discovery of the Higgs boson eight years ago. This time Sharma and members of his team have found the characteristic signature of the Higgs boson’s interaction with an elementary particle called the muon.

Following the theory that the way particles interact with the Higgs boson accounts for their differences in mass, Sharma and his collaborators turned to the LHC again to test it. Their study produced a groundbreaking result—the first measurement of the interaction between the Higgs boson and the muon. Their research, targeted for publication, is now accessible via preprint online.

“This result was not expected for another five years,” Sharma said. “It was one of the most challenging things we have done.”

Sharma explained that since the Higgs boson discovery, there has been an enormous effort to understand how the Higgs boson’s interactions with other elementary particles compare with the precise predictions of the standard model. This is a set of mathematical formulas and measurements describing elementary particles and their interactions, categorizing them into two main types: fermions and bosons.

To break down the science, everything in the universe is made up of fermions (matter particles) and bosons (force particles). Typical of science, these particles are further classified into more types and “generations,” partly because of their variation in mass. The muon is a fermion, like the electron, but it is 200 times heavier than the electron and 2,000 times lighter than the top quark, another type of fermion. While the standard model of particle physics describes the behavior of elementary particles in the universe, it doesn’t explain their diversity in mass. The LHC is a tool for scientists that collides highly energetic beams of protons (another type of particle), thereby exciting the space-time continuum. “It is like a time machine that can recreate the conditions of the universe less than a nanosecond after it was created,” said Sharma.

The CMS detector is a superfast camera that uses a charged particle tracking system to precisely measure the properties of particles produced in the aftermath of a collision. The tracking system measures muons, for example, as they pass through a very strong (3.8 Tesla) magnetic field, that is about 100,000 times stronger than the earth's magnetic field. CMS reconstructs a typical muon produced in a LHC collision within one to two percent of its true momentum and with very high efficiency.

Higgs bosons produced in proton-proton collisions decay quickly to other elementary particles. By measuring the Higgs boson decay rate to a particle, the scientists can infer the interaction strength between the Higgs field and that particle. Therefore, these measurements directly test the predicted mechanism by which particles acquire mass.

“These extraordinary reconstruction capabilities have made it possible for the CMS Collaboration to report the first evidence for the Higgs field's feeble interaction with muons,” the scientists explain in their paper.

The “Higgs boson” is named for the Nobel Laureate Peter Higgs, who, in the 1960s, was among the first to introduce the idea of an omnipresent quantum field to describe subatomic phenomena. The Higgs boson is the particle associated with the excitation of this field. The “Higgs mechanism” was soon incorporated into a theory that suggested: 1) the mass of elementary particles arises through their interaction with the Higgs field and 2) the strength of the interaction is related to the particle mass. But the only way to prove the theory was to test it. This led to the recent work of Sharma and his team of UC San Diego researchers including Adish Vartak, Raffaele Gerosa and Stephane Cooperstein, along with their CMS collaborators. Plotted on the horizontal axis is the mass of elementary particles and on the vertical axis is the strength of their interaction with the Higgs field. The dashed line is the prediction from the standard model. The colored dots are the measurements. The red dot represents the new measurement of Sharma, et. al. In the lower panel, the ratio between the measured value and the standard model prediction is shown. Image courtesy of the CMS Collaboration.

“This background from other processes makes isolating the Higgs boson decay to muons extremely challenging. Several novel analysis techniques including machine learning were employed to isolate the signal,” said Cooperstein.

According to Vartak, the probability of this finding being due to a statistical fluctuation is less than one part in 700. “With this new result, we can examine the Higgs field’s interaction with masses that are more than a factor 10 smaller than before,” he said.

This research was supported by the United States Department of Energy (grant no. DE-SC0009919).