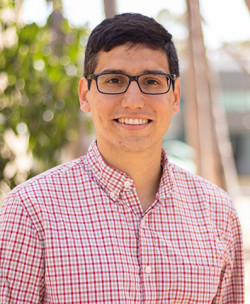 UC San Diego physicist Javier Duarte is on a roll. The U.S. Department of Energy (DOE) recently announced its selection of 76 scientists from across the nation to receive significant funding for research—part of its Office of Science’s Early Career Research Program. Duarte was among that selective roster of researchers whose work will get a boost from the program. Duarte is also the newest addition to the university’s Compact Muon Solenoid (CMS) Collaboration at the European Organization for Nuclear Research (CERN), which brings together particle physicists from across the globe seeking to advance humanity’s knowledge of the basic laws of the universe by analyzing the world’s highest-energy proton collisions at the Large Hadron Collider (LHC).

Under the DOE program, designed to support exceptional scientists during their crucial early career years, university-based researchers like Duarte receive grants for at least $150,000 per year for five years. The money covers salary and research expenses. For Duarte, it will also support his research project titled, “Real-Time Artificial Intelligence for Particle Reconstruction and Higgs Physics.”

“My proposed research is to develop a real-time system to reconstruct particles originating from the LHC’s proton collisions using artificial intelligence (AI). Instead of being explicitly programmed, AI algorithms learn directly from data or simulation,” explained Duarte.

The work involves implementing these algorithms in special hardware in order to process data with a latency, or delay, of less than a microsecond. This system will help the CMS experiment to select the most interesting proton collisions to save and analyze. The research also has broader implications for the use of AI in low-latency applications across all fields of science.

“I’m honored to receive this (DOE) award,” Duarte said. “It is exciting to develop new AI techniques at the forefront of high energy physics. It feels like the beginning of a new era, where we’re reinventing the capabilities of our experiment with innovative AI methods.”

In his role as assistant professor of physics and William A. Lee Chancellor’s Endowed Junior Faculty Fellow, Duarte joins other UC San Diego physics researchers to continue the university’s long-time leadership in the CMS Collaboration, whose work involves the CMS detector—a general-purpose detector at the LHC. It was used by UC San Diego physicists to observe the long-sought Higgs boson—a fundamental particle associated with the Higgs field, which gives rise to the masses of the other elementary particles. The UC San Diego contingent recently led an analysis that resulted in CMS surpassing its 1,000th paper mark.

“The paper is interesting in its own right, even if it wasn’t the 1,000th paper,” said Professor of Physics Frank Würthwein. “And it so happens that it’s a paper Philip Chang, my postdoctoral scholar, is leading.” The paper reports a new observation of a very rare process: the simultaneous production of three W or Z bosons, the carriers of the weak nuclear force, which is responsible for the phenomenon of radioactivity.

“Coincidentally, the 1,001st submitted CMS paper was also led by UC San Diego so this is a very productive time for us in CMS,” said Duarte. The second paper, led by Duarte and his collaborators, is a search for extremely high energy Higgs bosons. Though no observation is reported, tantalizing hints of potential new physics are seen.