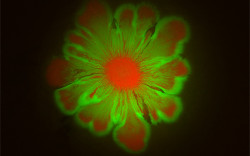 Microbial communities inhabit every ecosystem on Earth, from soil to rivers to the human gut. While monoclonal cultures often exist in labs, in the real world, many different microbial species inhabit the same space. Researchers at University of California San Diego have discovered that when certain microbes pair up, stunning floral patterns emerge.

In a paper published in the a recent issue of eLife, a team of researchers at UC San Diego’s BioCircuits Institute led by Lev Tsimring, Research Scientist and BioCircuits Institute’ Associate Director, together with Yuansheng Cao and Wouter-Jan Rappel from the Department of Physics,reports that when non-motile E. coli(Escherichia coli) are placed on an agar surface together with motile A. baylyi (Acinetobacter baylyi) in a small droplet, the E. coli“catch a wave” at the front of expanding A. baylyi colony.

The agar provided food for the bacteria and also a surface on which E. colicouldn’t easily move (making it non-motile). A. baylyi, on the other hand, can crawl readily across the agar using microscopic legs called pili. Thus a droplet of pure E. coliwould barely spread over a 24-hour period, while a droplet of pure A. baylyi would cover the entire area of the Petri dish.

Yet when the E. coliand A. baylyi were mixed together in the initial droplet, both strains flourished and spread across the whole area as the non-motile E. colihitched a ride on the highly mobileA. baylyi. However, what most surprised researchers were intricate flower-like patterns that emerged in the growing colony over a 24-hour period.

“We were actually mixing these two bacterial species for another project, but one morning I found a mysterious flower-like pattern in a Petri dish where a day earlier I placed a droplet of the mixture. The beauty of the pattern struck me, and I began to wonder how bacterial cells could interact with each other to become artists”, said Liyang Xiong, UCSD physics graduate student (he recently defended his Ph.D.) and the lead author of the study.

To uncover how the flower patterns were formed, Xiong et al. developed mathematical models that took into account the different mechanical properties of the two strains, primarily the differences in their growth rate, motility, and effective friction against the agar surface. The theoretical and computational analysis showed that the pattern formation originates at the expanding boundary of the colony, which becomes unstable due to drag exerted byE. colithat accumulate there.

Further analysis suggests this type of pattern is expected to form when motile bacteria are mixed with a non-motile strain that has a sufficiently higher growth rate and/or effective surface friction, which could have important implications in studying growing biofilms.

Biofilms are communities of microorganisms—including bacteria and fungi—that adhere to each other and to surfaces, creating strong matrices that are difficult to break down. Common examples include dental plaque and pond scum. They also grow in medical devices such as pacemakers and catheters. Learning how non-motile bacteria can “stick” to motile bacteria may provide insight into how biofilms are formed and how they can be eliminated.

“Bacterial pattern formation has been quite an active area of research in the last two-three decades”, said Lev Tsimring,  “However, absolute majority of laboratory studies and theoretical models were focused on dynamics of single-strain colonies. Most of bacteria in natural habitats, however, live in multi-strain communities, and so the researchers are finally beginning to look for mechanisms controlling their co-habitation. While a number of biochemical mechanisms of inter-species communication and cooperation, such as quorum-sensing signaling, metabolic co-dependence, and chemotaxis, have been identified, we found that surprising complexity may result from purely physical interaction mechanisms.”

Other researchers on this project include Robert Cooper and Jeff Hasty (BCI and UCSD Biology and Bioengineering). This work was supported by the National Institutes of Health (grant R01-GM069811), the National Science Foundation (grant PHY-1707637), San Diego Center for Systems Biology (NIH grant P50-GM085764) and the DOD Office of Naval Research (grant N00014-16-1-2093).

This article was written by Michelle Franklin for the UCSD news site, and originally published here.