Scientists Confirm Events that Occurred One Second after the Big Bang 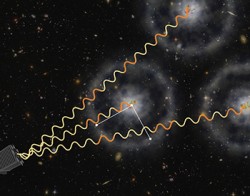 One second after the Big Bang 13.8 billion years ago an abundance of invisible subatomic particles was released from the hot plasma that filled the universe, forming what scientists call the cosmic neutrino background. These neutrinos pass through great distances in matter without being impacted, yet they influence the enormous distances between galaxies. Now a team of international scientists, including researchers from UC San Diego, has produced a measurement that adds to the understanding of the universe within a second of its creation. The research findings were published this week in Nature Physics.

“This work is important for two reasons: first, cosmic neutrinos are very difficult to detect directly in the lab, because their energies are so low. This measurement provides a new piece of evidence supporting this prediction from standard cosmology, which adds to our understanding of the universe starting around a second after the Big Bang,” explained Daniel Green, who contributed to the findings along with Raphael Flauger, both assistant professors in the Department of Physics at UC San Diego. “Secondly, the analysis method we used is novel and shows there is information about the very early universe encoded in the positions of galaxies that wasn’t erased by the complicated physics involved in galaxy formation.”

In their paper, Green and Flauger, along with their international collaborators, studied new Sloan Digital Sky Survey (SDSS) data of 1.2 million galaxies, out to a distance of about 6 billion light years. Their statistical analysis confirms the expected signature of the multitude of cosmic neutrinos that fills all of space. Their new measurement also confirms the standard cosmological model which links the production of neutrinos one second after the big bang to the clustering of galaxies billions of years later.

The effect of cosmic neutrinos on cosmic history had been detected before, and the team’s goal was to provide the first measurement from a galaxy survey. The research primarily involved computational and theoretical tools, relying on publicly available data from the Baryon Oscillation Spectroscopic Survey (BOSS) collaboration.

Green added that this study originated in 2017, when he, the University of Amsterdam’s Daniel Baumann and Matias Zaldarriaga from the Institute of Advanced Study hypothesized that information about the cosmic neutrino background should be measurable in the distribution of galaxies. Previously, many theorists would have assumed it was impossible to isolate it from the complicated physics of galaxy formation.

“The present work was initiated because we wanted to show that this measurement was not just a theoretical possibility, but that it was really possible in current and future data. We took the suggestions from previous research and showed how to make it work in the real world,” said Green, adding that inventing new tools to understand the universe was an exciting part of the research.

“Going from the initial idea right-through to the measurement with real data does not happen very often in one’s career,” Green noted. “It is also incredible to realize that the distances between galaxies and clusters of galaxies—the largest objects in the universe—on enormous scales are influenced by one of the lightest and most weakly interacting particles we know, the neutrino, and that this change to the distances is large enough to be measured with data already available to the public.”

This work was supported by the Alfred P. Sloan Foundation, the Department of Energy, (grant no. DE-SC0009919), a grant from the Simons Foundation/SFARI 560536, and by NASA (grant no. 17-ATP17-0193), with thanks to the University of California, Berkeley for hospitality while this work was being completed.