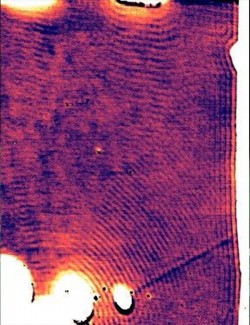 To begin to understand the field of plasmonics, picture the rich colors of stained glass windows in Gothic cathedrals or the pixelation of a digital photo on a laptop screen. In some way, shape or form these are plasmons on display. Basically, plasmons are traveling waves of rippling electrons that can be excited in plasmas, metals or semiconductors. They lie at the heart of plasmonics. In such systems, plasmons bunch up and spread out as a group, enhancing and manipulating electromagnetic energy and concentrating optical energy beyond the diffraction limit of light. But much of this energy in common materials is quickly lost, or dissipated, as heat. And, while plasmons have found commercial applications in chemical sensors (e.g., common drug-store pregnancy tests), they have not been applied more widely or ambitiously because of high dissipation, which has frustrated scientists—until now.

Applying principles of condensed matter physics, University of California San Diego Professor Michael Fogler teamed with alumni researchers, and with colleagues at Columbia University led by Professor Dmitry Basov, to conduct breakthrough research differentiating the origins of plasmonic dissipation. The results of this study, which could apply to new generations of sensors, future high-speed devices, laser surgery and robotics, were recently published in Nature in an article titled, “Fundamental limits to graphene plasmonics.”

“Our detailed theory of plasmonic dissipation was able to elucidate fundamental physics behind this remarkable discovery,” said Fogler.

Using a thin layer of graphene—a soft, flaky graphite material like pencil lead—the scientists collected measurements with a newly designed, one-of-a-kind cryogenic nano-imaging apparatus that demonstrates a novel methodology for differentiating the origins of plasmonic dissipation. Until now, the fundamental limits of plasmonic losses in graphene were unknown.

“Specifically, our work is the first to apply ‘a gold standard’ of condensed matter physics—the examination of the temperature dependence—to the problems of the dissipation in graphene,” noted Basov.

The scientists identified the dissipation limits by measuring plasmon losses as a function of temperature and comparing these results with theoretical models. This enabled the researchers to distinguish between different loss mechanisms. In so doing, the team established a new record for the plasmon lifetime and the length of propagation, at a temperature of 60º Kelvin (-352º Fahrenheit), which is low conventionally but easily accessible with modern cryogenics.

Fogler explained that his previous research in collaboration with Basov, reported in a widely cited paper published six years ago, raised a hope that graphene could be a low-loss plasmonic medium. This became more realistic as the quality of graphene samples improved over time. Fogler noted an unexpected result of the present study was the observation that the intrinsic travel range of highly confined plasmonic modes extended over macroscopic distances limited largely by sample dimensions.

At UC San Diego, we prefer the path less traveled. And it has led us to remarkable new ways of seeing and making a difference in the world. Our Department of Physics’ graduate program in the Division of Physical Sciences ranks among the top 20 programs in the nation, according to U.S. News and World Report.