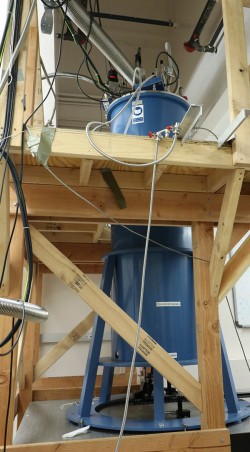 Currently, information-processing tools like computers and cell phones rely on electron charge to operate. A team of UC San Diego physicists, however, seeks alternative systems of faster, more energy-efficient signal processing. They do this by using “excitons,” electrically neutral quasiparticles that exist in insulators, semiconductors and in some liquids. And their latest study of excitonic spin dynamics shows functional promise for our future devices.

In their research, Professor Leonid Butov and recent physics PhD graduate Jason Leonard, applied indirect excitons (IXs)—specially designed quasiparticles in a layered semiconductor structure—in Bose-Einstein condensate form. With this condensate of IXs, the scientists discovered that the IXs’ spin coherence was conserved when they traveled over long distance, proving hopeful for more energy-efficient signal processing in the future. The study’s results also presented a way to achieve long-range spin coherence—necessary for efficient and speedy circuits using spin transfer. Their findings were published recently in Nature Communications.

Using a specially crafted optical dilution refrigerator set at a very low temperature—0.1 Kelvin or 459.50 F below zero—Butov and his team transformed the IX gas to a condensate by the frigid temperature to achieve spin coherence at the range of 10 micrometers, a range conducive to the development of high-functioning devices exploring spin transfer.

“We started the project trying to explain a quantum phase shift and ended up with a practical observation of spin transport,” noted Leonard.

While this experiment demonstrated one of the capabilities of IX spin coherence at cryogenic temperatures, Butov’s previous study showed that IXs can exist in semiconductors at room temperature—an important step toward practical application.

These studies were supported by the Department of Energy Office of Basic Energy Sciences (award DE-FG02-07ER46449) and coherence studies by the NSF (grant no. 1640173) and NERC, a subsidiary of SRC, through the SRC-NRI Center for Excitonic Devices.

At UC San Diego our research efforts are designed to change the world for the better—through new medicines, innovative technologies and more that will help address disease, global security, public policy, climate change and more. The Department of Physics in the Division of Physical Sciences is one of the university’s founding departments. The first students to enroll at the university in 1960 were graduate students in physics. Today our graduate program in physics is among the top 20 in the nation.