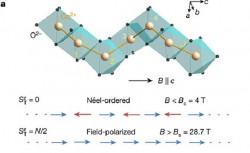 University of California San Diego condensed matter physicists noticed something surprising about electrons—they behave like a family. Electrons not only carry electric charge as exhibited in electric currents, but they also possess spins which are responsible for quantum magnetic properties. Electron spins can organize, bond and interact. When excited, one spiraling part impacts the others.

These findings impact the study of quantum magnetism in condensed matter physics—a field that examines the organizing principles of quantum states of matter, particularly emergent behaviors of trillions of electrons (as in superconductivity and magnetism). The study is explained in a paper titled “Experimental observation of Bethe strings,” published in a recent edition of Nature.

“The strongly correlated electron spin system we studied is analogous to a highly organized society, and electrons are its citizens,” explained Wu, describing condensed matter physics as the sociology of electrons. “They not only compete, but also collaborate, developing rich social structures which can be precisely described by advanced mathematical and physical methods.”

With ESR, a method that uses terahertz lights or microwaves to excite and measure spin dynamics, the researchers discovered a series of associated spectral lines—a type of “fingerprint” identification, explained by quantum mechanics and with quantum numbers—first hypothesized by Nobel Laureate Hans Bethe in the 1930s. In strongly correlated quantum spin systems, a single spin’s flip excites its neighbors, who follow suit with these “excitations,” known scientifically as “magnons.” Bethe first proposed that two magnons could bind to form a “string state.” How to observe these exotic states, however, has challenged scientists for decades.

“In the exotic string states, the bound magnons we observed are like people with family bonding,” Wu said. “An electron society is integrated; it can be highly organized in a way guided by the underlying, elegant mathematical principles of quantum group symmetries. What I enjoy most about this work is its internal harmony between physical reality and mathematical beauty.”

Wu said for strongly correlated quantum problems, if there were no good strategy, the complexity of computation is so huge that no modern computer could do the job.

“Fortunately, the system we studied can be described by integrable models. Our brains, assisted by pencil and paper, are the best equipment rather than computers,” stated Wu, adding that this study will aid the communication between condensed matter and high energy physics communities.

The UC San Diego physicists acknowledge A. Loidl, the experiment leader at University of Augsburg; Jianda Wu, now at the Max Planck Institute for the Physics of Complex Systems in Dresden, Germany;  and Shenglong Xu, Congjun Wu’s former student, now a postdoctoral scholar at the University of Maryland.

The Department of Physics, along with the chemistry and biochemistry and the mathematics departments at UC San Diego, is part of the Division of Physical Sciences. All three departments are ranked in the top 20 for their doctoral programs, according to U.S. News and World Report.