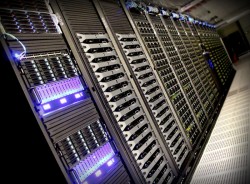 Comet, the result of an NSF grant worth almost $24 million (€22.7) including hardware and operating funds, is the first eXtreme Science and Engineering Discovery Environment (XSEDE) production system to support high-performance virtualization at the multi-node cluster level. The cluster’s use of Single Root I/O Virtualization (SR-IOV) means researchers can use their own software environment, as they do with cloud computing, but achieve the high performance they expect from a supercomputer.

“Scientists at campuses across the nation will be able to transparently compute from their desktops, labs, and campus infrastructures onto Comet, significantly expanding the reach of our new cluster toward what’s called the ‘long tail’ of science, or the idea that the large number of modestly-sized computationally-based research projects represents, in aggregate, a tremendous amount of research that can yield scientific discovery,” says SDSC director Michael Norman. “We’re already seeing interest in Comet’s virtual clusters from other institutions, and expect that additional projects will enter production with them in the coming months.”

Beginning with the next XSEDE allocation review in December, it will be possible to request allocations transparently across Comet and OSG.

The integration of Comet into the OSG provisioning system was led by a team including UC San Diego professor Frank Würthwein, an expert in experimental particle physics and advanced computation. “Everybody wins in this collaboration, as OSG members are already conducting scientific research on this expanded infrastructure,” says Würthwein. “OSG’s user community across physics, chemistry, biology, mathematics, and the social sciences gains transparent access to new capabilities, and neither SDSC nor OSG system engineers need to maintain a large new set of services that they wouldn’t be supporting anyway.”

Würthwein joined SDSC, an Organized Research Unit of UC San Diego, in January 2015 to help implement a high-capacity data cyberinfrastructure across all UC campuses, as well as connect to key cyberinfrastructure organizations such as OSG. Würthwein was OSG’s founding executive during 2005, and has again served as its executive director since February 2015.

“We are pioneering the area of virtualized clusters, specifically with SR-IOV,” said Philip Papadopoulos, SDSC’s chief technical officer. “This will allow virtual sub-clusters to run applications over InfiniBand at near-native speeds – and that marks a huge step forward in HPC virtualization. In fact, a key part of this is virtualization for customized software stacks, which will lower the entry barrier for a wide range of researchers by letting them project an environment they already know onto Comet.”