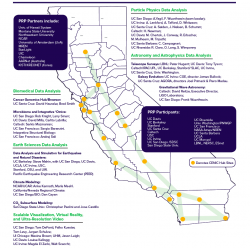 The Pacific Research Platform, made possible by a grant from the National Science Foundation, has been selected by the Corporation for Education Network Initiatives in California (CENIC) as a recipient of the 2016 Innovations in Networking Award for Experimental Applications. The NSF proposal investigators Larry Smarr, Tom DeFanti, Frank Würthwein, Phil Papadopoulos, (UC San Diego), and Camille Crittenden (UC Berkeley), have had essential technical support from John Graham (UC San Diego), John Hess (CENIC), and Eli Dart (ESnet).

From biomedical data to particle physics, researchers depend heavily on high-speed access to large datasets, scientific instruments, and computing resources. To meet the needs of researchers in California and beyond, the National Science Foundation awarded a five-year grant to fund the Pacific Research Platform (PRP). The PRP’s data sharing architecture, with end-to-end 10 – 100 gigabits per second connections, will enable region-wide virtual co-location of data with computing resources and enhanced security options.

“To accelerate the rate of scientific discovery, researchers must get the data they need, where they need it, and when they need it,” said UC San Diego computer science and engineering professor Larry Smarr, principal investigator of the PRP and director of the California Institute for Telecommunications and Information Technology (Calit2). “This requires a high-performance data freeway system in which we use optical lightpaths to connect data generators and users of that data.”