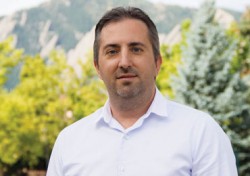 Experimental physics is not for the fainthearted. One tiny error - or a concatenation of many?- can keep a complicated experiment from working smoothly. Fortunately, Tenio Popmintchev has the tenacity for it.

Popmintchev, a laser physicist at the JILA institute at the University of Colorado Boulder, thinks nothing of running an experiment for 72 hours straight, or spending years tinkering with a finicky set of high-powered lasers, or shipping the entire setup to Vienna to re-create the experiments with collaborators there. A commitment to detail drives Popmintchev's rising career, says his adviser and mentor Henry Kapteyn. "Tenio is not intimidated by what might go wrong in an experiment, and is very good at identifying and investigating the unknowns that might be holding an experiment back," Kapteyn says.

At age 39, Popmintchev has already played a key role in inventing the first tabletop X-ray laser, which uses short pulses of light to illuminate the nature of matter. Its bright beams promise to probe everything from the movements of electrons and atoms within DNA to the folding of proteins in extraordinary detail. It would be relatively cheap and multipurpose, a Swiss army knife made of light that many researchers could use. "The same kind of revolution that happened with lasers in the 1960s is happening now in X-ray science," Popmintchev says.