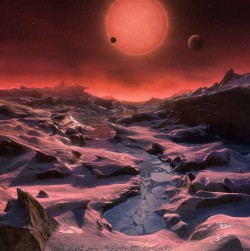 An international team of astronomers, including UC San Diego's Professor Adam Burgasser and graduate student Daniella Bardalez Gagliuffi, has reported in Nature the discovery of three Earth-sized planets orbiting near the "habitable zone" of an ultracool dwarf star named TRAPPIST-1, 40 light years in the direction of the constellation Aquarius. These are the first terrestrial planets to be discovered around such a tiny and dim star, and opens a new avenue in the search for life beyond Earth.

The planets were found via the transit method, in which a planet passing between us and its host star blocks a small portion of the starlight, producing a subtle but periodic dimming pattern. Multiple transits for this star were detected with the TRAPPIST (TRAnsiting Planets and PlanetesImals Small Telescope) telescope, and their timings indicate the presence of three planets with orbit periods between 1.5 days and 73 days. These short orbits are likely to be in or around the habitable zone of the star, a zone in which liquid water could potentially exist on the planets' surfaces. Evidence that this is the case will have to wait until the 2018 launch of the James Webb Space Telescope, which will have the capability of measuring the chemical composition of these planets' atmospheres.