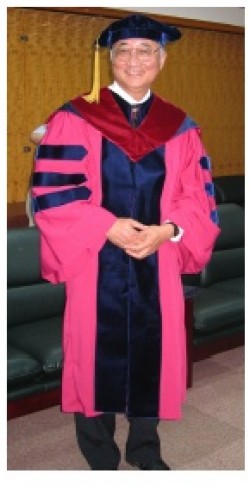 UCSD Physicist Lu J. Sham was awarded a Doctorate, honoris causa, from National Chiao Tung University, Taiwan, in June 2006. The citation in the certificate, honoris causa, reads "For his broad research contributions, including the quantum theory of molecules and solids, particularly, the co-founding of the Density Functional Theory, which has far reaching influence on computational physics and chemistry, and solid state quantum information and computation, particularly the optical control of spin interaction, which opens up another influential area."
National Chaio Tung University is in Hsinchu, Taiwan, the heart of the semiconductor industry, especially III-V compounds. The university is a powerhouse in telecommunications and optoelectronics.