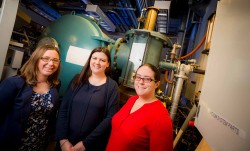 As the number of women interested in majoring in physics increases, three new physics professors hope to open doors for those seeking to pursue research careers.

Quinn Konopacky measures the infrared radiation emanating from Jupiter-sized planets outside of our solar system, which provides a view of their distant atmospheres.

Shelley Wright is leading a search for laser pulses from intelligent life in the universe while developing a crucial instrument that will allow astronomers to see distant stars more clearly on what will become the world's largest telescope.

And Karin Sandstrom is studying the diffuse gas and dust between the stars in galaxies, tracking how it evolves over the history of the universe.

These three women- astrophysicists recently hired as assistant professors of physics in UC San Diego's Division of Physical Sciences and the Center for Astrophysics and Space Sciences, or CASS-are giving humanity a view of the universe as it's never been seen before.

But their impact goes far beyond their pioneering celestial research on telescopes around the world. On campus, they've joined UC San Diego's four other female physics professors-Alison Coil, Eva-Maria Collins, Olga Dudko and Elizabeth Jenkins-as important mentors and role models for women like themselves hoping to pursue careers in astronomy and physics.

"Astronomy and physics are still very male-dominated fields, and it can be challenging for women to get to the next level," explained Konopacky. "So even though record numbers of women are entering graduate school in these fields, it's still difficult to push through to the next level and get permanent positons. What we used as our role models were the women who were able to survive during much more difficult and much more challenging times; people like my former graduate advisor at UCLA, Andrea Ghez, or Margaret Burbidge, who is a distinguished emeritus physics professor here, or Sally Ride [a former physics professor at UC San Diego]. I hope that through my teaching and by involving students in my research I can help open up more doors for women in the future who are following behind me as well."

"Improving diversity in any field benefits the community as a whole," said Wright, noting that she's honored to be on the same campus where Maria Mayer, the second woman ever to win a Nobel Prize, was hired as a physics professor, and Margaret Burbidge, who was initially denied access to Palomar Observatory because of her gender, paved the way for the current generation of women astronomers. "We're scientists and, as scientists, we know that when you bring in people with different perspectives and experiences, it helps you solve problems."

Recognizing those benefits, more and more of the nation's universities are making diversity a top priority in faculty recruitments. But that trend has also heightened competition among the top research institutions for the best candidates. All of which makes UC San Diego's recruitment of three prominent female early-career astrophysicists a remarkable achievement.

"This was a coup," said George Fuller, the director of CASS, adding that astronomy and physics departments around the country have taken notice and many have sent congratulations. "These are outstanding scientists. And they are working in fields that are very crucial to us."

During the 2014 academic year, about one-third of the nation's physics and astronomy departments hired exclusively men, said Susan White, a statistician at the American Institute of Physics, in College Park, Md., who keeps track of annual hiring statistics for astronomy and physics at U.S. universities and colleges. Among the remaining two-thirds of institutions that were successful in adding a female physics or astronomy faculty member, "the vast majority hired one woman, while about 10 percent hired two," she said.

"I would say it's very exceptional," added White of the campus' three new physics faculty recruitments. "That's very hard to do."

"Our ability to recruit the best early-career scientists is a testament to the strength of our faculty and research programs," said Mark Thiemens, dean of the Division of Physical Sciences. But it's also been helped along by an innovative hiring program in the division to increase faculty diversity in physics, chemistry and mathematics-disciplines long dominated by white males.

"We told the departments to search for anyone, in any field," he added. "Above all, they must be an extraordinary scholar, but one with an exceptional commitment to diversity. Standard searches aren't sufficient to move the needle. You have to be aggressive, to go out and find the best people."

While the physics department last year was provided funding from the campus to hire one new faculty member, the exceptional background of the three candidates allowed it to argue for a second position through the division's excellence fund and a third from the UC Office of the President, said Ben Grinstein, chair of the physics department.

So what will be the impact for students of the near doubling in one year of the number of female physics professors on campus? Plenty.

Grinstein pointed out that the number of female physics majors on the campus has steadily grown, nearly tripling in just the past eight years-from 36 students in 2008 to 101 students in the 2015 fall quarter. That trend, he said, underlines the importance of having visible role models and mentors among the faculty for women hoping to pursue advanced degrees and careers in physics and astronomy.

According to the American Institute of Physics, female graduate students and postdocs in those fields are frequently hampered by "the imposter syndrome"-the belief that they don't really belong in scientific disciplines dominated by men. As a consequence, many women drop out before they can establish their careers as scientists. But effective mentors, particularly other women scientists, have been shown in studies to counteract that problem.

"Men can also be exceptional mentors," said White. "But there's something about being someone who looks like you. It's easier to believe you can do something when they look like you."

Along with Alison Coil, an associate professor of physics who has long taken the leadership on campus in promoting opportunities for women in astronomy and physics, the three new assistant professors have been working with students to help plan a three-day regional Conference for Undergraduate Women in Physics, which took place on the campus last weekend.

Sandstrom is mentoring an undergraduate physics major, Bethany Ludwig, on a project studying the dust from a supernova remnant and is overseeing the work of a graduate student from Bulgaria, Petia Yanchulova Merica-Jones, examining the glowing dust from images taken by the Hubble Space Telescope. Konopacky is working with Debbie Tran, a physics major specializing in astrophysics, who has been helping her analyze data from the Gemini Planet Imager, the instrument in Chile and Hawaii from which they are able to obtain detailed information in the infrared about the atmospheres of Jupiter-like planets outside of our solar system.

"Debbie has made a huge amount of progress in a very short time and the work that she's done has already been incorporated into papers by a number of different people in our collaboration," said Konopacky.

"New areas in astrophysics have been created that didn't exist a few years ago," he said. "If you throw away half the population, you're not doing the field or your institution any good."

Fuller noted that the physics faculty takes special pride in the fact that UC San Diego was one of the first universities to actively recruit the best women physicists and astronomers in the world-at a time when other universities wouldn't hire them as full-time faculty members or would otherwise put restrictions on their employment.

"UC San Diego was a pioneer in that regard," he said. Before Maria and Joseph Mayer were recruited to the campus in 1960 from the University of Chicago, for example, it was Joseph, not Maria, who had a faculty position. "Maria only had a desk there," Fuller said. "UC San Diego gave Maria Mayer her first faculty job." In 1963, as a professor of physics here, Mayer won the Nobel Prize in Physics for proposing the nuclear shell model of the atomic nucleus.

Two years after Maria Mayer's arrival, in 1962, Margaret Burbidge and her husband Geoffrey were recruited from the University of Chicago as professors. But in order to avoid the anti-nepotism hiring rules at the time, the campus found a way to hire Margaret as a chemistry professor because Geoffrey's appointment was in physics. Margaret was eventually given a professorship in physics, served as the first director of CASS from 1979 to 1988 and was awarded the National Medal of Science in 1983.

In recent decades, Fuller lamented that the university hadn't been able to build on its longstanding tradition of breaking the glass ceiling for outstanding women physicists by providing more faculty positions to women. But he's clearly thrilled that in one year, in one fell swoop, the pendulum has swung back again.