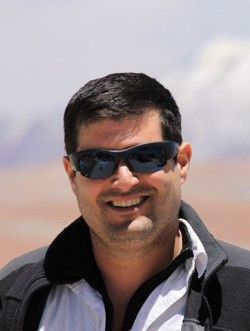 A project to study the origins of the universe that is led, in part, by scientists at UC San Diego has won a $5 million grant from the National Science Foundation, the school announced Thursday. The funding to support the Simons Array, which will consist of three powerful telescopes in Chile's Atacama desert, will pay for three years of observation and data analysis of the Big Bang, along with graduate student stipends, undergraduate research scholarships, travel and other operational expenses, according to UCSD.

"People are the heart of any good experiment," said Brian Keating, UCSD professor of physics. "We would not be able to design, fabricate, test and deploy the hardware of the Simons Array - not to mention travel to Chile to observe the distant universe - without the NSF funding."

Keating is leading the project with Adrian Lee, a UC Berkeley professor of physics.

The array is named for James and Marilyn Simons of the Simons Foundation, which provided the initial funding to build and install two telescopes that will join a telescope already in Chile. The three together make up the Simons Array.

According to UCSD, the telescopes will create high-fidelity maps of polarization in the cosmic microwave background, which scientists will analyze for evidence of inflation after the Big Bang.

The CMB is remnant radiation that has cooled and stretched with the expansion of the universe to microwave lengths. The radiation acts as an enormous backlight, illuminating the large-scale structure of the universe and carrying an imprint of cosmic history, UCSD said.

The array is designed to extract faint cosmological systems that are often hidden by dust in the galaxy, which can interfere with other types of telescopes. The new scopes are able to separate the CMB and dust signals by their spectral signatures, according to UCSD.

"The Simons Array represents the boldest, most ambitious and most sensitive instrument ever designed to fully mine the cosmic microwave background of its secrets," Keating said. "With the Simons Array, we have a chance to glimpse the universe in its infancy."

UCSD said the Simons Array will also be the first to measure the masses of neutrinos, the only form of dark matter known to exist. The ghostly particles elude capture, making them difficult to study.

The first of the two new telescopes is scheduled to be deployed later this year and go into use next year, according to school officials.

According to UCSD, the project could still use more funding to support operations and student researchers.