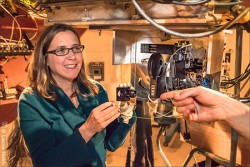 Astronomers have expanded the search for extraterrestrial intelligence into a new realm with detectors tuned to infrared light. Their new instrument has just begun to scour the sky for messages from other worlds.

"Infrared light would be an excellent means of interstellar communication," said Shelley Wright, an Assistant Professor of Physics at the University of California, San Diego who led the development of the new instrument while at the University of Toronto's Dunlap Institute for Astronomy & Astrophysics.

Pulses from a powerful infrared laser could outshine a star, if only for a billionth of a second. Interstellar gas and dust is almost transparent to near infrared, so these signals can be seen from greater distances. It also takes less energy to send the same amount of information using infrared signals than it would with visible light.

The idea dates back decades, Wright pointed out. Charles Townes, the late UC Berkeley scientist whose contributions to the development of lasers led to a Nobel Prize, suggested the idea in a paper published in 1961.

Scientists have searched the heavens for radio signals for more than 50 years and expanded their search to the optical realm more than a decade ago. But instruments capable of capturing pulses of infrared light have only recently become available.

Three years ago while at the Dunlap Institute, Wright purchased newly available detectors and tested them to see if they worked well enough to deploy to a telescope. She found that they did. Jerome Maire, a Fellow at the Dunlap, "turned the screws," Wright said, playing a key role in the hands-on effort to develop the new instrument, called NIROSETI for near-infrared optical SETI.

NIROSETI will also gather more information than previous optical detectors by recording levels of light over time so that patterns can be analyzed to for potential signs of other civilizations, a record that could be revisited as new ideas about what signals extraterrestrials might send emerge.

Because infrared light penetrates farther through gas and dust than visible light, this new search will extend to stars thousands rather than merely hundreds of light years away. And the success of the Kepler Mission, which has found habitable planets orbiting stars both like and unlike our own, has prompted the new search to look for signals from a wider variety of stars.

NIROSETI has been installed at the University of California's Lick Observatory on Mt. Hamilton east of San Jose and saw first light on March 15.

Lick Observatory has been the site of several previous SETI searches including an instrument to look in the optical realm, which Wright built as an undergraduate student at UC Santa Cruz under the direction of Remington Stone, the director of operations at Lick at that time. Dan Werthimer and Richard Treffers of UC Berkeley designed that first optical instrument. All three are playing critical roles in the new search.

NIROSETI could uncover new information about the physical universe as well. "This is the first time Earthlings have looked at the universe at infrared wavelengths with nanosecond time scales," Werthimer said. "The instrument could discover new astrophysical phenomena, or perhaps answer the question of whether we are alone."

The group also includes SETI pioneer Frank Drake of the SETI Institute and UC Santa Cruz who serves as a senior advisor to both past and future projects and is an active observer at the telescope.

Drake pointed out several additional advantages to a search in this new realm. "The signals are so strong that we only need a small telescope to receive them. Smaller telescopes can offer more observational time, and that is good because we need to search many stars for a chance of success." he said. The receivers are also much more affordable that those used on radio telescopes.

"There is only one downside: the extraterrestrials would need to be transmitting their signals in our direction," Drake said, though he sees a positive side to that limitation. "If we get a signal from someone who's aiming for us, it could mean there's altruism in the universe. I like that idea. If they want to be friendly, that's who we will find."

The NIROSETI team also includes Geoffrey Marcy and Andrew Siemion from UC Berkeley; Patrick Dorval, a Dunlap undergraduate, and Elliot Meyer, a Dunlap graduate student. Shelley Wright is also a member of the Center for Astrophysics and Space Sciences at UC San Diego. Richard Treffers is now at Starman Systems. Funding for the project comes from the generous support of Bill and Susan Bloomfield.