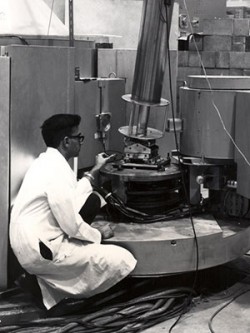 UCSD Physics Professor Sunil Sinha was awarded the Roentgen Medal for X-ray Science to be presented in 2015 by the Mayor of Reimscheid, the town where Roentgen was born.

The medal is awarded annually to an individual from any country in the world who has in the widest sense worked to develop, promote and spread Roentgen's scientific legacy. The award has earned itself a place of high respect in scientific and medical circles.

A committee of the Society of Friends and Benefactors of the Roentgen Museum (also founded in 1951) selects a suitable candidate and proposes their name to the Mayor of Remscheid, who makes the award.