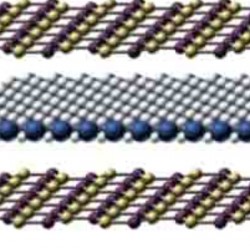 An elusive state of matter called superconductivity could be realized in stacks of sheetlike crystals just a few atoms thick, a trio of physicists has determined.

Superconductivity, the flow of electrical current without resistance, is usually found in materials chilled to the most frigid temperatures, which is impractical for most applications. It's been observed at higher temperatures-higher being about 100 kelvin or minus 280 degrees below zero Fahrenheit-in copper oxide materials called cuprate superconductors. But those materials are brittle and unsuitable for fabricating devices like circuits.

In a paper published in Nature Communications the week of July 28, Michael Fogler and Leonid Butov, professors of physics at the University of California, San Diego, and Konstantin Novoselov, Nobel laureate in physics and professor at the University of Manchester, propose a design for an artificially structured material that should support superconductivity at temperatures rivaling those seen for cuprates.

This sets up a situation in which electrons and "holes" left by a missing electrons would accumulate in separate layers of the semiconductor compound in response to an electrical field. And yet these separated electrons and holes would be bound, at a distance, in states called indirect excitons.

Superfluidity and superconductivity are macroscopic manifestations of quantum phenomena, which are usually seen at the smallest physical scales.

The proposed design is an initial blueprint, the authors write. Their analysis reveals a general principle for creating "coherent states" like superfluidity and superconductivity that would emerge in similar materials created with layers of other semiconductor compounds such as tungsten disulfide or tungsten diselenide as well.

Such van der Waals structures are the subject of many investigations; this new analysis demonstrates that they also provide a new platform for exploring fundamental quantum phenomena.

Practical uses are possible as well; these materials could be used to develop electronic and optoelectronic circuits.