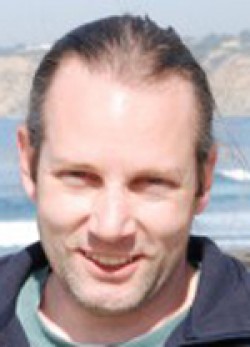 Professor Murphy developed an awareness of the acute challenges facing our society by teaching Physics 12, Energy and the Environment, at UCSD beginning in 2004. Since then, he and his wife have transformed their lives into a low-resource-use experiment, reducing home energy usage by a factor of five, harvesting rainwater, raising chickens for eggs, growing food, experimenting with off-grid solar power, and changing dietary and travel habits for a lower impact.

Applying physics skills (honed in his research testing General Relativity) to societal-scale problems, Professor Murphy initiated a popular blog called Do the Math to explore the challenges of the 21st century. Together with various published articles and talks at conferences and other schools, "Tom represents UC San Diego's sustainability ideals to the outside world," as one of his colleagues commented.