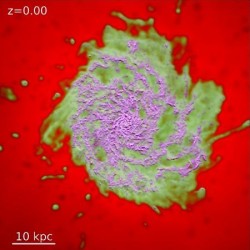 Dusan Keres and collaborators convincingly show that large amount of energy released by individual stars has dramatic consequences for the evolution of galaxies. For a long time astrophysicists attempted to understand why galaxies contain only a small fraction of the material available in the universe.

In a new set of realistic supercomputer models of galaxies in our universe called FIRE (The Feedback in Realistic Environments) multi-university collaboration convincingly showed that this lack of cosmic material in galaxies is related to energetic events that closely follow formation of stars. Energy released by individual young stars substantially affects the evolution of galaxies and pushes large quantities of galactic gas into the inter-galactic medium preventing its accumulation in galaxies. (Link to press release from Caltech: http://www.caltech.edu/content/galaxies-fire-star-feedback-results-less-massive-galaxies).