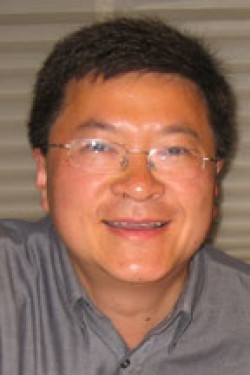 "Hwa and colleagues have used an integrated computational and experimental approach to show that protein expression influences cell growth and vice versa," says James J. Collins, who studies synthetic biology at Boston University. "That's important because efforts in synthetic biology assume that synthetic circuits and other constructs are in most cases isolated and independent of other actions in cells."

The researchers changed the state of Escherichia coli cells by inhibiting their ribosomes, which tends to suppress protein expression, or by varying their nutrient levels. They found that when the growth rate increases by boosting nutrients, the ribosome content of cells likewise increases linearly, increasing protein expression. Another linear relationship they found was that "when you slow down the ribosome, the cell makes more ribosome and less of other proteins," Hwa notes.

On the basis of these growth laws, they divided the bacterium's proteome into three broad categories: ribosomal, metabolic, and housekeeping. Housekeeping proteins, which account for about 50% of the proteome, don't change with growth state, but the cell varies in the other two categories, depending on growth conditions.

The findings also help explain why engineered pathways in bacteria slow down cell growth: Because "unnecessary" proteins produced by engineered genes reduce the production of both metabolic and ribosomal portions of the proteome. "We predicted that the growth rate would drop linearly with the amount of these unnecessary proteins in the cell," Hwa says. They found that growth slowed down just as predicted when engineered E. coli expressed ß-galactosidase in large quantities.

"The authors have shown that the cell cycle itself, and the general growth state of the cell, plays a big role in the output of your circuit," Collins says.