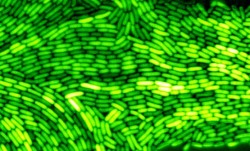 One of the most basic and intensively studied processes in biology--one which has been detailed in biology textbooks for decades--has gained a new level of understanding, thanks to the application of simple math to a problem that scientists never before thought could benefit from mathematics.

The scientists who made the discovery, published in this week's advance online publication of Nature, found that the process bacteria use to quickly adapt to metabolize preferred energy sources such as glucose--a process called "catabolite repression"--is controlled not just by glucose, as had long been known and taught, but just as much by other essential nutrients, such as nitrogen and sulfur, available to bacteria in their growth medium.

"This is one of the most studied processes in molecular biology; it's in every textbook," says Terence Hwa, a professor of physics and biology at UC San Diego, who headed the team of scientists. "We showed that this process doesn't work the way most people thought it did for the past several decades, and its purpose is different from what had generally been assumed."

The basic phenomenon, Hwa says, is analogous to a balanced diet: To reduce an individual's sugar uptake, common wisdom is to reduce the availability of sugar. This strategy backfires on bacteria because they would increase their appetite for sugars -- the process of catabolite repression would direct the bacteria to increase the production of their sugar uptake system to counteract the scarcity of sugar in the environment. However, by figuring out that catabolite repression actually works by sensing the difference between the influx of sugar and that of other essential nutrients such as nitrogen, it is possible to drastically lower the bacteria's appetite for sugar by simply rationing the supply of nitrogen.

Hwa and his team arrived at their surprising finding by employing a new approach called "quantitative biology," in which scientists quantify biological data and discover mathematical patterns, which in turn guide them to develop predictive models of the underlying processes.

"This mode of research, an iterative dialogue between data quantitation and model building, has driven the progress of physics for the past several centuries, starting with Kepler's discovery of the law of planetary motion," explains Hwa. "However, it was long thought that biology is so laden with historical accidents which render the application of quantitative deduction intractable."

The significance of the study, according to Hwa, is that it demonstrates that the physicists' quantitative approach can also effectively probe and elucidate biological processes, even a classic problem that has been heavily scrutinized.

"Molecular biology gives us a collection of parts and interactions," says Hwa. "But how do you make sense of those interactions? You need to examine them in their physiological context. Quantitative patterns in physiological responses, together with mathematical analysis, provide important clues that can reveal the functions of molecular components and interactions, and in this case, also pinpoint the existence of previously unknown interactions."

"It is remarkable that after so many years of studying these cells there are more fascinating things to be discovered by simple experiments and theory," says Krastan B. Blagoev, a program director in the National Science Foundation's Division of Physics, which jointly funded the research with the agency's Molecular and Cellular Biology Division.

Hwa and his team of physicists and biologists at UC San Diego are among the world's leaders in quantitative biology, which is gaining an upsurge of interest and importance in the life sciences. According to a recent National Academy of Sciences report, advances in quantitative biology are a necessary ingredient to ensure our nation continues to make future progress in medicine, genetics and other life science disciplines. By quantifying the complex behavior of living organisms, for example, researchers can develop reliable models that could allow them to more accurately predict processes like drug interactions before untested pharmaceuticals are used in human clinical trials. UC San Diego is in the middle of a major expansion in quantitative biology, with plans to hire 15 to 20 faculty members in this new discipline in different departments over a three-year period.

In their study, the UC San Diego scientists collaborated with colleagues at Peking University in China, the University of Marburg in Germany and the Indiana University of School of Medicine--an international research team formed six years ago with the help of a grant from the Human Frontier Science Program, headquartered in Strasbourg, France.

Biologists have long known that when glucose is the primary carbon source for cells, bacteria such as E. coli repress genes that allow the organism to metabolize other kinds of sugars. This catabolite repression effect is controlled by a small molecule known as "cyclic adenosine monophosphate"--or cAMP.

"Previously, it was thought that glucose uptake sets the cAMP level in the cell," says Hwa. "But we discovered that in reality, it's the difference between carbon uptake and the uptake of other essential nutrients such as nitrogen. So the picture now is very different."

The UC San Diego scientists unraveled this relationship by measuring the level of cAMP and the level of enzymes that break down sugar molecules in bacterial cells against the growth rates of the bacteria, while subjecting these cells to limiting supplies of carbon, nitrogen and other compounds.

"When we plotted our results, our jaws dropped," recalls Hwa. "The levels of the sugar uptake and utilization enzymes lined up remarkably into two crossing lines when plotted with the corresponding growth rates, with the enzyme level increasing upon carbon limitation and decreasing upon nitrogen and sulfur limitation. The enzyme levels followed the simple mathematical rules like a machine." "From the overall pattern, it is clear that there's nothing special about glucose," he adds. "Now we know this process is not about the preference of glucose over other carbon compounds, but rather the fine coordination of carbon uptake in the cell with other minor, but essential nutrient elements such as nitrogen and sulfur."

Hwa points out that the physiological insights derived from simple mathematical relations guided them to figuring out both the strategy and molecular mechanisms their bacteria employ to coordinate carbon metabolism with those of other elements. Such knowledge may be very valuable to the fermentation industry, where metabolic engineers strive to rewire the genetic programs of industrial microorganisms to increase their yield of desirable products, such as insulin for biomedical applications and ethanol for bioenergy.

Hwa further speculates that by similarly quantifying how the human metabolic control system deals with different types of nutrient limitations, one may envision novel strategies to combat diseases such as obesity, which involves an imbalance of macronutrient composition, or even cancer, which requires a full suite of nutrient elements to fuel its rapid growth.

While quantitative biology papers are often filled with complicated mathematical formulas and involved heavy number crunching by computers, Hwa says the mathematics used in this discovery was surprisingly simple.

"We just used line plots," he says. "Our entire study involves just three linear equations. They're the kind of things my 10-year-old daughter should be able to do. Quantitative biology doesn't have to be fancy." Like their mathematical approach, Hwa says his team's experiments were simple enough most of them could have been done 50 years ago. In fact, one prominent scientist was on the right track to discovering the same thing nearly 40 years ago. The Nobel-Prizewinning French scientist Jacques Monod, who was the first to study the effects of catabolite repression quantitatively during World War II 70 years ago and whose study led eventually to the birth of molecular biology 20 years later, wrote a paper published months after his death in 1976 that questioned the standard understanding of catabolite repression--a publication that had been long forgotten until Hwa mentioned his team's results recently to some colleagues from France.

"Monod knew that something was not quite right with the standard picture of cyclic AMP," says Hwa, who was directed to that 1976 paper. "He knew that nitrogen was having an effect on the input and he knew that somehow it was very important."

Hwa says he and his team are now applying the same quantitative approaches to learn more about the response of bacteria to antibiotics and how cells transition from one state to another. "This kind of quantitative, physiological approach is really underutilized in biology," he adds. "Because it's so easy to manipulate molecules, biologists as well as biophysicists tend to jump immediately to a molecular view, often decoupled from the physiological context. Certainly the parts list is important and we could not have gotten to the bottom of our study without all of the molecular work that had been done before. But that in of itself is not enough, because the very same parts can be put to work in different ways to make systems with very different functions."

Other authors of the paper were UC San Diego scientists Conghui You, Hiroyuki Okano, Sheng Hui, Zhongge Zhang, Minsu Kim and Carl Gunderson; Yi-Ping Wang of Peking University in China; Peter Lenz of the University of Marburg in Germany; and Dalai Yan of the Indiana University School of Medicine in Indianapolis.