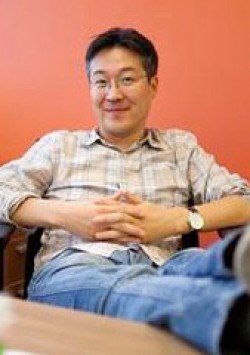 A biology and physics professor Suckjoon Jun at UC San Diego has received a $1.15 million grant from the National Science Foundation to establish a series of annual "boot camps" that will educate San Diego-area high school and college students about an emerging field at the intersection of physics and biology called "quantitative biology."

"Quantitative biology is more than adding numbers to what biologists already know," says Suckjoon Jun, an assistant professor of physics and molecular biology, who received the five-year Faculty Early Career Development (CAREER) grant, awarded by the foundation to promising young scholar-researchers, and will work with a biology professor at San Diego State University to start the first of the boot camps next summer. "The power of the approach is to bring quantitative rigor from physical sciences to identify and solve important and interesting problems in biology."

Jun is part of a new generation of scientists at UC San Diego and other institutions across the nation, fluent in both physics and biology, engaged in developing and testing quantitative models that attempt to quantify and predict the complex behavior of living organisms. Such models are important because they can allow researchers to predict processes like drug interactions before untested pharmaceuticals are used in humans. According to a recent National Academy of Sciences report, advances in quantitative biology are a necessary ingredient to ensure our nation continues to make future progress in medicine, genetics and the life sciences.

In his own research, Jun and colleagues in his laboratory are investigating experimentally and theoretically how the inner machinery of cells evolved to the point they can sense their size and, as they grow, when to divide. "It sounds pretty simple, but we have no clue," he says.

The results from his study could have many important applications, such as a better understanding of the runaway cell division that leads to cancer. To conduct his study, Jun developed a tiny device a few years ago to isolate and physically manipulate individual genetic materials.

"It turned out that we can use the same device, now known as the 'mother machine,' also to follow the life history of thousands of individual bacterial cells for hundreds of generations," he says. "We looked at the growth patterns of the cells very, very carefully, and realized that there is something really special about the way the cells control their size."

Jun, who earlier this year had been awarded a $240,000 grant from the Pew Charitable Trusts and a $1.6 million award from the Paul G. Allen Family Foundation, established by one of the co-founders of Microsoft, to pursue his investigations will engage students enrolled in the boot camps in a study very similar to his research.

In collaboration with Anca Segall, a professor of biology at San Diego State who will help to design and implement the boot camps, Jun says the overall goal of the new project is "to spread the culture of quantitative approaches to biology" from high school students to college students in the San Diego area.

"We'll use quantitative biology to answer questions of what is the common principle of size control among different species of bacteria, and what makes them different?" says Jun. "The goal of the program will not only be the education of local students, but eventually the design of exemplary undergraduate research modules that can be integrated into standard undergraduate research curricula in quantitative biology courses at UC San Diego, SDSU and other universities across the nation.