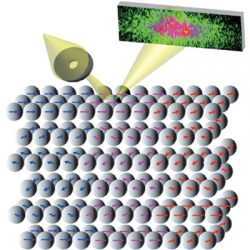 One of the most satisfying aspects of condensed matter physics is that a variety of condensed matter systems show universal behavior, i.e. behavior that appears to be common to a wide variety of unrelated systems. A jamming transition occurs when the density of particles becomes large enough and the motion of the particles is restricted by the surrounding particles (think traffic jams!). In this regime, the particles cannot fluctuate freely but move collectively via long range interactions. Examples are colloidal gels or polymer emulsions. Recent work carried out in the Sinha group (S.-W. Chen, H. Guo, K. A. Seu, K. Dumesnil, S. Roy, and S. K. Sinha, Physical Review Letters 110, 217201 (2013) ) using X-ray scattering show that magnetic domains in an antiferromagnet have dynamical behavior very similar to that exhibited by several other jammed systems. The magnetic spins in the rare earth element dysprosium undergo a phase transition from a disordered state to a spiral ordered structure at a temperature of 180 K. When the temperature is slightly above the phase transition temperature, the spins start to form clusters which eventually become magnetic domains below the transition temperature. These domains are head to head with each other and the domain walls form a disordered network, which mimics the jammed state in a soft matter system. As the temperature is further lowered, the sizes of the domains increase and eventually the dynamics are kinetically arrested, as happens when a material becomes a glass.