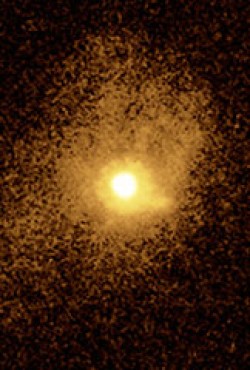 Astronomers have spotted a galaxy that is igniting new stars faster than ever seen before. Measurements from several instruments show that gas in this galaxy is condensing to form stars close to the maximum rate thought possible.

"What is unique about this particular galaxy is that it is forming stars so rapidly with such a tiny supply of gas," said Aleksandar Diamond-Stanic, a fellow at the University of California's Southern California Center for Galaxy Evolution who helped make the discovery. A team of nine astrophysicists recently reported the finding in Astrophysical Journal Letters.

The team of astronomers estimated the amount of gas in the galaxy using the IRAM Plateau de Bure Interferometer, a telescope in the French Alps that detects a light signal associated with hydrogen gas, the fuel of stars. Images from the Hubble Space Telescope show gas concentrated in a zone just a few hundred light years across, yet that gas is condensing and igniting new stars at a rate hundreds of times that of our own Milky Way galaxy.

The distant galaxy, 6 billion light years away, initially popped out of an image captured by a satellite-based NASA instrument called WISE, for Wide-field Infrared Survey Explorer. The image revealed infrared light, an indication of star formation, pouring out of the galaxy.

That rate of star formation combined with the estimate of available fuel indicates an efficiency close to the theoretical maximum, called the Eddington limit.

"This galaxy is like a highly tuned sports car, converting gas to stars at the most efficient rate thought to be possible," said Jim Geach, an astrophysicist at McGill University who led the study.

"We've caught it just before it runs out of gas," adds Diamond-Stanic, a member the research group led by Alison Coil, a physics professor at UC San Diego who also co-authored the report. This rate of star birth is so ferocious that most of the galaxy's gas will be gone in just a few tens of millions of years, a brief episode in the course of its evolution.

That's why they think no galaxy quite like this one has ever been seen before. Once star formation abates, the team expects the galaxy to mature into a steadier state: an ordinary reddish, elliptical galaxy.