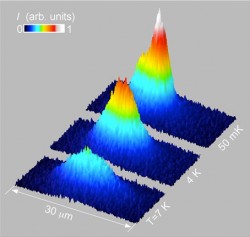 Physicists have trapped and cooled exotic particles called excitons so effectively that they condensed and cohered to form a giant matter wave.

This feat will allow scientists to better study the physical properties of excitons, which exist only fleetingly yet offer promising applications as diverse as efficient harvesting of solar energy and ultrafast computing.

"The realization of the exciton condensate in a trap opens the opportunity to study this interesting state. Traps allow control of the condensate, providing a new way to study fundamental properties of light and matter," said Leonid Butov, professor of physics at the University of California, San Diego. A paper reporting his team's success was recently published in the scientific journal Nano Letters.

Excitons are composite particles made up of an electron and a "hole" left by a missing electron in a semiconductor. Created by light, these coupled pairs exist in nature. The formation and dynamics of excitons play a critical role in photosynthesis, for example.

Like other matter, excitons have a dual nature of both particle and wave, in a quantum mechanical view. The waves are usually unsynchronized, but when particles are cooled enough to condense, their waves synchronize and combine to form a giant matter wave, a state that others have observed for atoms.

Scientists can easily create excitons by shining light on a semiconductor, but in order for the excitons to condense they must be chilled before they recombine.

The key to the team's success was to separate the electrons far enough from their holes so that excitons could last long enough for the scientists to cool them into a condensate. They accomplished this by creating structures called "coupled quantum wells" that separate electrons from holes in different layers of alloys made of gallium, arsenic and aluminum.

Then they set an electrostatic trap made by a diamond-shaped electrode and chilled their special semiconducting material in an optical dilution refrigerator to as cold as 50 milli-Kelvin, just a fraction of a degree above absolute zero.

A laser focused on the surface of the material created excitons, which began to accumulate at the bottom of the trap as they cooled. Below 1 Kelvin, the entire cloud of excitons cohered to form a single matter wave, a signature of a state called a Bose-Einstein condensate.

Varying the size and depth of the trap will alter the coherent exciton state, providing this team, and others, the opportunity to study the properties of light and mater in a new way.

This most recent discovery stems from an ongoing collaboration between Leonid Butov's research group in UC San Diego's Division of Physical Sciences, including Alexander High, Jason Leonard and Mikas Remeika, and Micah Hanson and Arthur Gossard in UC Santa Barbara's Materials Department. The Army Research Office and the National Science Foundation funded the experiments, and the Department of Energy supported the development of spectroscopy in the optical dilution refrigerator, the technique used to observe the exciton condensate in a trap.