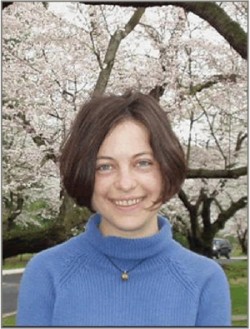 UC San Diego physicist Olga Dudko and her colleagues at the University of Cambridge resolve a central discrepancy between theory and experiment regarding how molecules fold in response to applied forces.

Single-molecule force spectroscopy, which measures how a molecule responds to mechanical forces pulling it apart, is an important tool in the study of biomolecules and other polymers. Experiments have shown that for weak forces molecules end up in two or more states, depending on the amount of stretching, which researchers attribute to how molecules fold and unfold. However, they have found it difficult to close in on a theoretical explanation. One recent study maintains that these experiments monitor a barrierless process, rather than one where the barrier is known to exist. It concluded that what the experiments are actually observing is merely the collapse of the molecules, and not folding per se.

In their paper in Physical Review Letters, Olga Dudko at the University of California, San Diego, and co-workers appear to resolve this gap in our understanding of this fundamental mechanism in biomolecular interactions. From molecular simulation studies of molecular energy surfaces ("energy landscapes"), they find that there is indeed a barrier to folding, and it is this barrier that is probed by the experiments. It is just that the barrier appeared to be absent-hidden, as it were-in the earlier theoretical work, partly because of the method chosen to project a complicated, multidimensional folding scenario onto a single dimension (the "reaction coordinate"). A more robust choice of a folding coordinate ends up revealing the barrier.

This resolution of a central discrepancy between theory and observations in the important field of molecular-particularly protein-folding should bring about a collective sigh of relief among many biological physicists and physical chemists. - Sami Mitra, Physical Review Letters, American Physical Society