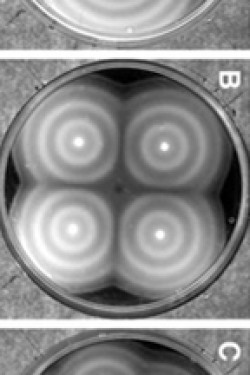 Many living things have stripes, but the developmental processes that create these and other patterns are complex and difficult to untangle.

Now a team of scientists has designed a simple genetic circuit that creates a striped pattern that they can control by tweaking a single gene.

With multiple starting points, bacteria guided by a simple genetic circuit can create intricate patterns.
"The essential components can be buried in a complex physiological context," said Terence Hwa, a professor of physics at the University of California, San Diego, and one of the leaders of the study published October 14 in Science. "Natural systems make all kinds of wonderful patterns, but the problem is you never know what's really controlling it."

With genes taken from one species of bacterium and inserted into another, Hwa and colleagues from the University of Hong Kong assembled a genetic loop from two linked modules that senses how crowded a group of cells has become and responds by controlling their movements.

One of the modules secretes a chemical signal called acyl-homoserine lactone (AHL). As the bacterial colony grows, AHL floods the accumulating cells, causing them to tumble in place rather than swim. Stuck in the agar of their dish, they pile up.

Because AHL doesn't diffuse very far, a few cells escape and swim away to begin the process again.

Left to grow overnight, the cells create a target-like pattern of concentric rings of crowded and dispersed bacterial cells. By tweaking just one gene that limits how fast and far cells can swim, the researchers were able to control the number of rings the bacteria made. They can also manipulate the pattern by modifying how long AHL lasts before it degrades.


A colony of bacteria with a "synthetic" genetic circuit develops a pattern of strips over 24 hours.
Although individual bacteria are single cells, as colonies they can act like a multicellular organism, sending and receiving signals to coordinate the growth and other functions of the colony. That means fundamental rules that govern the development of these patterns could well apply to critical steps in the development of other organisms.

To uncover these fundamental rules, Hwa and colleagues characterized the performance of their synthetic genetic circuit in two ways.

First, they precisely measured both the activity of individual genes in the circuit throughout the tumble-and-swim cycle. Then they derived a mathematical equation that describes the probability of cells flipping between swim and tumble motions.

Additional equations describe other aspects of the system, such as the dynamics of the synthesis, diffusion and deactivation of one of the cell-to-cell chemical signal AHL.

This three-pronged approach of "wet-lab" experiments, precise measurements of the results, and mathematical modeling of the system, characterize the emerging discipline of quantitative biology, Hwa said. "This is a prototype, a model of the kind of biology we want to do."