Suspects in the quenching of star formation exonerated 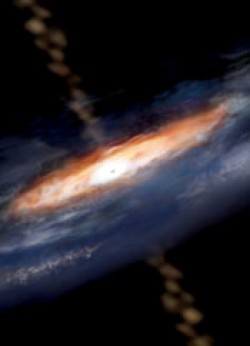 Supermassive black holes millions to billions times the mass of our Sun lie at the heart of most, maybe all large galaxies. Some of these power brilliantly luminous, rapidly growing objects called active galactic nuclei that gather and condense enormous quantities of dust, gas and stars.

Because astronomers had seen these objects primarily in the oldest, most massive galaxies that glow with the red light of aging stars, many thought active galactic nuclei might help to bring an end to the formation of new stars, though the evidence was always circumstantial.

That idea has now been overturned by a new survey of the sky that found active galactic nuclei in all kinds and sizes of galaxies, including young, blue, star-making factories.

“The misconception was simply due to observational biases in the data,” said Alison Coil, assistant professor of physics at the University of California, San Diego and an author of the new report, which will be published in The Astrophysical Journal.

“Before this study, people found active galactic nuclei predominantly at the centers of the most massive galaxies, which are also the oldest and are making no new stars,” said James Aird, a postdoc at the University of California, San Diego’s Center for Astrophysics and Space Sciences, who led the study.

Black holes, such as those at the centers of active galactic nuclei, can’t be observed directly as not even light escapes their gravitational field. But as material swirls toward the event horizon, before it’s sucked into the void, it releases intense radiation across the electromagnetic spectrum, including visible light. Of these, X-rays are often the brightest as they can penetrate the dust and gas that sometimes obscures other wavelengths.

“When we take into account variations in the strength of the X-ray signal, which can be relatively weak even from extremely fast-growing black holes, we find them over a whole range of galaxies,” Aird said

He searched the sky for X-rays from active galactic nuclei using two orbiting telescopes, the XMM-Newton and the Chandra X-ray Observatory, and compared those signals to a large-scale survey of about 100,000 galaxies that mapped their colors and distances.

Coil led that survey, called PRIMUS, along with colleagues now at New York University and the Harvard College Observatory. Using the twin Magellan telescopes at Las Campanas Observatory in Chile, they detected the faint light of faraway galaxies.

They measured both the color of each galaxy and how much the spectrum of that light had shifted as the galaxies receded in our expanding universe – an estimate of their distance from Earth. Because distances in space reach back in time, they’ve captured nearly two-thirds of the history of the universe in particular segments of the sky.

In a sample of about 25,000 of the galaxies from the PRIMUS survey, Aird found 264 X-ray signals emanating from galaxies of every kind: massive and smaller, old elliptical red galaxies and younger blue spirals. They’re everywhere.

Yet starmaking has ceased in many galaxies, probably when they ran out of gas, though it’s not clear how that happens. The interstellar gas could all be used up, turned into stars, but Coil studies another possibility: fierce galactic winds that have been seen blowing gas and dust from so-called starburst galaxies.

The source of those winds, and their influence on the evolution of galaxies, is one of Coil’s main areas of current investigation.