UCSD's POLARBEAR experiment is moving to its permanent location in the Atacama Desert, Chile 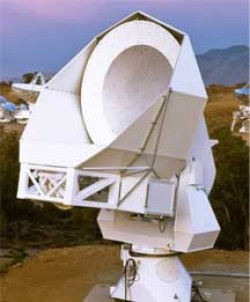 Following a successful "first-light" four-month observing run, UCSD's POLARBEAR experiment on the Huan Tran Telescope at the James Ax Observatory located in the Inyo National Forest near Bishop, CA, is moving to its permanent location in the Atacama Desert, Chile.

POLARBEAR is a collaboration between UC San Diego,
UC Berkeley, University of Colorado, McGill University, Imperial College, the Japanese High Energy Research Organization, and the University of Paris.
Polarbear's goal is to detect the gravitational waves produced during the era of inflation, shortly after the Big Bang by observing unique patterns of polarization of the Cosmic Microwave Background (CMB) radiation. These gravitational waves would be a telltale sign that inflation indeed took place. Additionally, measurement of the small angular scale polarization patterns have the capability to constrain the properties of Dark Matter and the mass of the neutrinos.

POLARBEAR's receiver is able to detect the polarization of the CMB radiation through an array of over 1200 superconducting transition edge sensor bolometers cooled to 0.25 degrees Kelvin to reduce noise. Many months of observations must be combined to improve the signal to noise enough to observe the desired signals. Atmospheric water vapor is the enemy of ground-based
microwave background measurements, hence the move to one of the driest sites on earth: the Atacama Desert, Chile where at an altitude of 16,500 feet, water vapor is greatly reduced.

The POLARBEAR team has begun decommissioning the temporary observatory in the Inyo mountains which will be reassembled in Atacama for observations starting in early 2011.